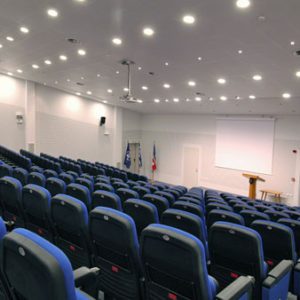 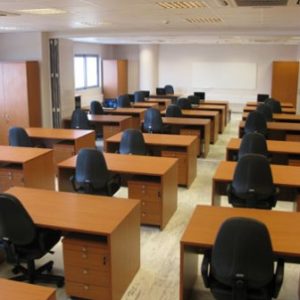 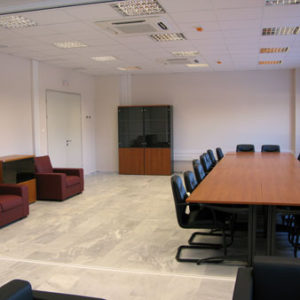 Coastal Urban Training Area (CUTA), a configuration of a coastal urban landscape is another powerful tool in the training opportunities NMIOTC provides. It is incorporating new training concepts in mock up environment with action analysis capabilities, in areas like: 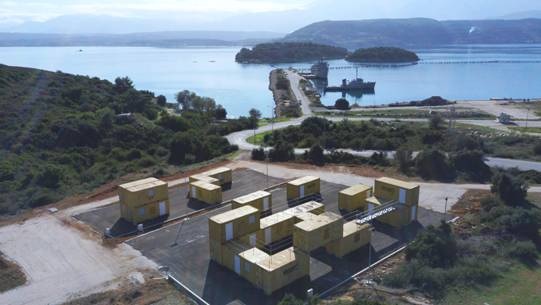 Containers Stack. A three containers stack is being used for the Container inspection module (3010). The stack is situated next to the main building at the training ground area. It is being used during the practical training, by the trainees, to exercise climbing – opening techniques. 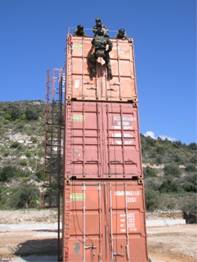 Training Tower. A 15 meter training tower is being used for the heliborne insertion/extraction module (3070). It is also situated next to the main building at the training ground area. It is being used during the practical training, by the trainees, to exercise fast rope descents from 6 and 12 meters, in order to get familiarized prior to execution from a helicopter. 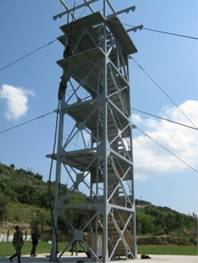 RHIBs. Two 9.5 meter RHIBs with specification to carry a Boarding Team of 12 men and the needs of boarding operations are used for the practical training. 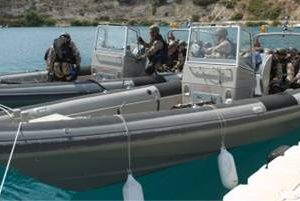 Confiscated pirate whaler. An original pirate whaler coming from the Horn of Africa is used during counter piracy training for an increased level of realism. Hellenic Navy seals act as pirates. 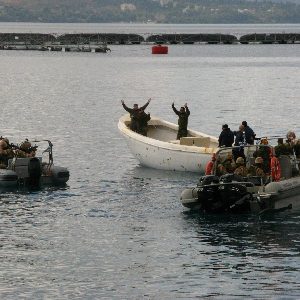 Training Ship. The ex-training ship “HS ARIS”, 130 meters long, with multiple decks and the accommodation philosophy of merchant ships is being used for multiple practical training modules such as Small arms training (3020), Tactical sweep (3030), Crew control (3040), RHIB insertion (3060), Boarding under multiple threats (3080) and for Simulated MIO scenarios. It is situated alongside a pier, near the NMIOTC main building. 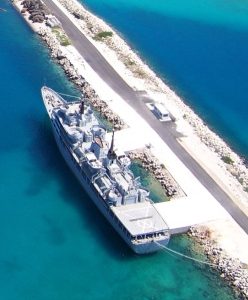 The training ship is equipped with the Enhanced Training System (ETS) to monitor and record training and also to create a more challenging and realistic environment. ETS comprises 35 cameras and visual, audio effects, like environmental noise from the ship engines, collective announcements in foreign languages, sound blasts, light flashes, smoke and booby traps.
All the effects are controlled from a control room where the instructors can supervise training and synchronize the effects with the trainee’s actions. The recorded video is available to trainees and used for debriefing.
ETS increases trainee’s sense of immersion in the training environment and helps to reproduce conditions close to reality in order to provide high quality of training. 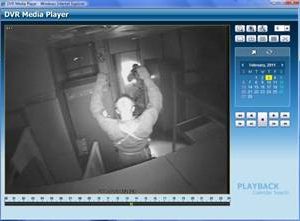 Helo. Hellenic Navy’s SH70 helicopters are used for the Heliborne insertion / extraction module (3070). The Fast Rope training is being conducted at the airfield of the 115 CW which is located within 15 minutes drive from NMIOTC. The trainees, during the practical training, can perform on request day and night fast rope descents from the helicopter. 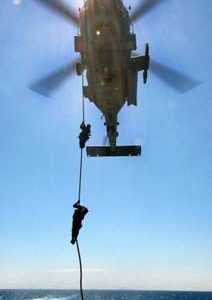 Training MIO Simulator. A simulator is available to train Command Teams and Staff Officers in MIO. The simulator can train up to 3 teams of 5 trainees each, at the same time, or 2 teams of 6 trainees each, depending on their background and training level (basic/advanced). Each cubicle simulates the CIC or the bridge of a naval unit. During the simulation the trainees can play the role of MIO Command Teams by controlling their ship (ownship) and conducting all the necessary acts in the context of a computer assisted MIO scenario, in order to fulfil their mission.

The trainees are given the tactical picture of the scenario area and the capability to communicate via text messages and simulated VHF radio with other warships or merchant vessels. The simulation exercise help trainees to practice MIO principles and procedures that have been taught at theoretical level in classroom and also, to practice decision making, tactical picture evaluation, prioritization, Rules of Engagement (ROEs) activation, voice communication procedures and MIO message reports, etc.

In MIO simulator the controllers (instructors) are capable to create a scenario off-line, execute it and change the tactical picture at runtime. Additionally, they can play various roles, during a scenario responding to VHF radio calls as merchant vessel’s master, Boarding Officer, helicopter pilot or play the role of higher authority (CTF) to approve ROE requests and other actions to students. 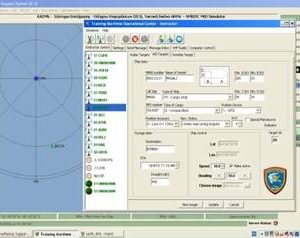